Farm from Grand Barhais at Donville, 23 years old in 1944 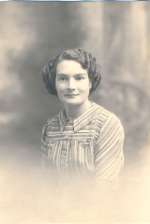 In June 1940 I was employed at Real Leforestier farm of large Barhais the hamlet of Donville in Méautis, within 100 meters of the chapel of Donville. My boss, Mr. Leforestier had been mobilized to go to war. So we were with his wife and children when a shell fell nearby farm when we were hiding in a shelter dug next to the house. We got scared and my boss decided to leave. I took a bicycle and I put the son Leforestier behind me. We left towards Méautis when a shell fell when we were in the Godard Lande. Fortunately we have not injured.

We left towards Saint-Germain on Sèves in Mr. Leforestier parents. I stayed in St. Germain-sur-Seves all day but the next day I went with the sister of Madame Leforestier milk cows in Donville. And then we met the first Germans. We were not proud at all! Nobody said a word! And then we milked the cows. We left by bike to St. Germain-sur-Seves. The next day we hit the road back to the farm of large Barhais Donville. Luckily the Germans did not occupy the farm, they have occupied in 1944. We continued work and milking cows. Mr. Leforestier my boss returned because it had not been captured by the Germans. These were a few times on the farm looking for supplies such as eggs, milk … mainly Germans occupied the village of Méautis. We had to have a pass and an ID card for travel. The Germans had cleared the marshes of Donville to prevent planes or parachutists landing. The swamp was so covered with water throughout the year that changed our breeding habits because there was no question of putting the animals graze in the corner!

On the evening of landing on June 5 evening my boss, Mrs. Leforestier had gone to bed with her sister in the hamlet of Corbeauville to Méautis. I stayed with the children and my boss Mr. Leforestier. In the night we heard terrible noises. I wondered what could make such a racket? So I climbed up there in the attic and oh! there were explosions all over the sky! It was probably paratroopers jumping but we did not know! It was a real fireworks and a reflection of the water in the marshes it was a strange effect! . So I called my boss for him to realize too. We did not know it was the landing!

The next morning my boss came back and I asked her if she had seen the Americans. She said no. We decided to go to Saint-Georges-de-Bohon to milk the cows. We returned by Castle Rougeval between Carentan and Méautis. It is here that we saw the parachutes that were left hanging in trees. And then we continued our road and Overview Mr. Paul Philip, who had been taken hostage by the Germans while the small farm Barhais. It will be shot by the Germans with two other civilians not far away after they dug their own graves …

The first time I saw an American paratrooper was at the entrance to the front door of the farmhouse large Barhais. I did not know what he wanted because he spoke American and I did not understand anything.

I understand all the same he was looking for other paratroopers. It was probably lost. He ended up leaving for probably try somewhere else because I was not able to give him information. By cons there was the girl Cardin, who was part of the railway bridge that overlooks the marsh Donville. She saw that paratroopers had fallen into the water and drowned. American paratroopers have not hidden on the farm of Grand Barhais, they hid in the hedgerows and hedgerow which was very dense at that time.

The Germans arrived in the farm 10 June 1944, I think it was a Saturday. We saw the officers arrive, the officers in command there and they took home and the whole farm. We did not have the right to access to the floor, we had to stay at the bottom of the home. We put mattresses on the windows to protect us because I assure you it was not pretty! The Germans who were in the farm came from the Army. They consisted in other Russians, Mongols who were captured and forcibly conscripted by the Germans. We had a terrible funk, they made us really scared! The Germans came from the village of Carentan Pommenauque. They had gone up the railway track and then come in Donville. We saw them fight to repel the Americans who were trying to take Carentan. I can assure you it was not pretty …

On Sunday, the shells were falling everywhere, mainly on agricultural buildings that were nearly destroyed. I had had the courage to get the cows in the farm next to the field. We then feature in a yet not destroyed barn. In the evening we had time to skim milk. We stayed in the small room where we had the right to eat. The next morning the German leaders had gone to the farm of Mr. Gosselin but most Germans remained in the Grand Barhais. I went to get the cows as I could.

The next morning in the middle of all this I met a German, an Alsatian who spoke French. He said “Madam must arrive from the SS. You must go!” I went to my boss who harnessed the horse to the cart.

We asked if we could take Germans blankets on the floor. They agreed and we took them. We also took bread, butter … and other supplies. We left the road down to the marshes of Donville and there we saw hundreds of German soldiers were everywhere in the fields, hedgerows! We had a terrible fear! We saw in Avenue Germans who were killed and who were left behind. We turned around to go through another road to Saint-Germain-sur-sap to go to the Mr. Leforestier parents. We were June 12, 1944 a day before the great battle of Donville!

We left in exodus to roughly Agon with our cart. We saw the Americans in July so we decided to go back to Exodus. On our return in July 1944 at the farm of large Barhais everything was destroyed except one piece of the dairy. The farm was burned and we never knew if it was the Germans or the Americans who had burned. It was terrible because everything was lost! The fields were smashed by shell holes, there were individual holes of soldiers, equipment of all kinds, the livestock was devastated! And all these people we had known who had been killed in the fighting or were shot by the Germans. I would not want anyone to know it. The war is a disastrous thing!

As we had no place to sleep we were hosted by Mr. and Mrs. Jules Lemelletier at Donville. Then we went back to live in the bakery of the farm of large Barhais. We managed to retrieve four cows and Mr. Leforestier decided to stop farming. He bought a bakery in Saint-Jean-de-Daye.

I saw the first black American to Donville in July 1944 and I was afraid of my life because I had never met. An American officer reassured me, telling me they were disciplined and we should not be afraid!