Manor Donville consists partly of mass walls specialists call lair. It is a mixture of clay, stripped of topsoil, water and a binder (straw, lime stones).

The land was taken on site by the workers in charge of construction. She was trampled either by animals or by farm staff. Mixing lasted the time it took to get a perfect elasticity that is to say sufficiently flexible without being too rigid. 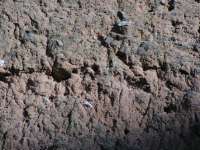 Meanwhile a stone frame running around the house to build and was lifted approximately one meter from the ground. For farm buildings This building was barely 80 centimeters of height above ground level. The explanation lies in the fact that the stone was a rare and expensive materials in the swamp.

Various measurements in Donville have found that the stone foundations were over 1 meter in height in previous parts in 18 century. As for the thickness of the walls may reach 1.10 m in places.

Once kneaded earth, she was carted to the fork or shovel on the walls that rose as successive layers. The lair was packed with sticks and then cut with a shovel to get the walls about rights. The height of the wall mounted depended on the address of the supervisor, the number of workers and especially climatic conditions. Because we had that previous layers dry for a minimum fill ensure the rise of subsequent layers. He had a few times several years to mount an accommodation of 10 meters. It is possible to distinguish on the north side of the mansion Donville different layers that have been lifted. Of course it was also possible to raise additional layers for larger residential … 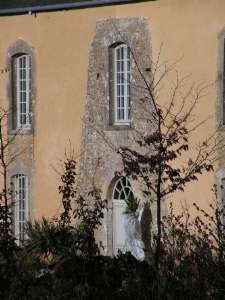 As for the interior of the dwelling walls were also removed in the same way: bearing walls had the facade sud remains of an ancient tower 1779mêmes stone foundation. Priority was given to the construction of fireplaces and its ducts and the angles of the house. The beams were then mounted rouis As the work progresses. Cattails in the chestnut trees or wooden planks placed between the rouis used to retain the land that was put on the beams so as to constitute floors. The interiors of rouis received a lime plaster or plaster. Floors Donville measure in some places around 70 centimeters thick ensures perfect thermal and sound insulation.

The house then received her frame which was mounted in pieces on the ground. The different pieces of wood were then coded lifts to be asked. 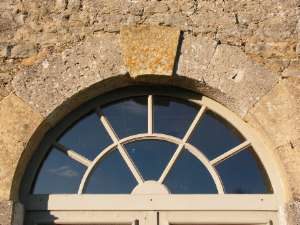 The most common wood framing on Carentan are those present in the marsh: elm, oak. Finally the roof was covered with thatch, insulating and inexpensive materials.

The decor was then carried out according to the means and modes. 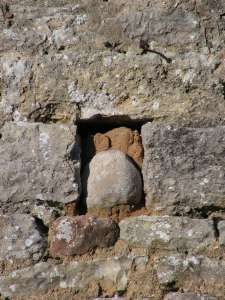 The mansion consists of Donville its major fronts parties triangular stone. He points probably higher than average financial means to bring the stone. Note that an ancient stone tower on the south facade was cut in the thickness direction at the time of the expansion of the main building in 1778.

Three types of stone are dominant in the manor of Donville: Valognes stone, stone Picauville and Caen stone. The study of the archives we found that these stones were transported by barges through the marsh or carts in the modernization of the manor in 1778

If you like stones, architecture, history of Normandy, sign up for a guided tour of the Manor of Donville organized by the owner.

→ Next: Restoring the Manor of Donville