June 06, 1944 American paratroopers came down behind the house. On the morning of June 6 to 8 hours I was with a teacher and some friends of my age to get our mare when we discovered a container with a parachute that fell in our field just behind the barrier which prevented to enter! We then discovered five paratroopers who were hiding in a dried-up pond near a hunting behind Chesnee. My first contact was a shock: I bent down to look at a tag left on the ground when I felt and saw a bayonet point on my stomach! Looking up I saw this great man all corked black and I immediately raised his arms in the air.

The leader gave the order to drop the guns. He then pulled out a card from his pockets and he asked us where he was. In fact they were completely lost.

They sought actually to join the tray they spoke in perfect French. The teacher, Mr. Quinette, which had some English notions told them where they were and where was the tray. They asked him where the Germans were. The teacher said that their company was in Rougeval the castle and another Pommenauque in Carentan, making them very difficult passage. Some friends of mine the Lande Godard Méautis have helped some to go by the ford crossing the road and they joined Donville.

At the Battle of Carentan I was in Chesnee to Méautis near the home of Raoul Dujardin. My parents were farmers and lived well with my grandparents and my great-grandmother. There is a fact that has remained in my memory very precisely: I was at the entrance of the house of Raoul Dujardin who had been requisitioned and that served as a makeshift hospital for the Germans when I saw Russian Mongols who were transporting wounded in carts covered with branches to evade Allied aircraft. It was horrible because there were soldiers who were screaming and in a state, you can not imagine! I saw feet, pieces of legs, probably dead and all that blood dripping on the road! Despite this vision of horror I thought the rout began for the Germans and that the end was near for them …

We decided to leave the house when we saw the arrival of neighbors who were down to tell us that the Germans had asked them to evacuate their homes because a battle was brewing. Also next to the house on the corner where starts a small path…

The Germans had set up a field kitchen. Suddenly one of them jumped over the fence and told me in a very good French “Do not stay there it will be a great battle and then with the SS that are coming you never know ...”

The next morning we heard an extraordinary working capital from the road to Carentan to Périers. It was a German armored column of all species covered branches for camouflage. They passed in front of us towards the town hall. We all thought that the town of Carentan would be taken back by the Germans. Then came a troop of SS panzer who came up soldiers returning from the Battle of Carentan Pommenauque. All these facts we decided to go with other civilians June 13 in the morning because the Battle of Donville in Méautis began. Shells came explode between our house and the church of Méautis. We had some business with us because we thought back quickly. As I think we got exodus August 15, 1944 almost two months later!

We hesitated to take the direction of Auvers what would have been beneficial for us because there was no heavy fighting. We decided to commit ourselves to the Picard cross. We met with civilians like us, who fled when suddenly a volley of shells fell just meters from us but not killing or injuring anyone. We panicked and we went through the fields. It took carry on their backs or on a small cart my great-grandmother 91 years old!

What tiredness and what panic. It was very difficult to cross gaps in the hedges. We met a lady who lived in the village of Fitting and whose husband was a prisoner in Germany. This house was near a crossroads, one more! We in the night heard a terrifying noise which was actually a salvo of shells.

I saw my grandfather was sleeping upstairs propelled to the bottom of the stairs by the force of the explosion. However, it has been nothing but a few bruises.

We stayed there, prostrate, listening to what was going to happen. Leaving the house we found that the apple was a few meters from the house was cut in half. So we decided to leave towards Périers … 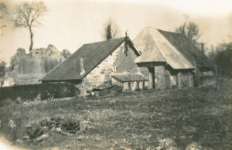 Ruins of the farm of Chesnee at Méautis, 1944 in France

When we returned to our farm everything was destroyed and burned. We lost everything, furniture, family memorabilia. I assure you that the shock has been especially hard to take for my parents! That’s why we do not have any pre-war photography. We decided to come live with the family in the bakery close to home with the grandparents, the great grandmother. We were very cramped but we were lucky to still be here. The garden that was with us was very helpful.

The chance we had was to have lost any member of the immediate family because you know Méautis 33 civilians have lost their lives!