The Germans were seen for the first time around Méautis instead said the red land Tuesday, June 18, 1940. They then went to the town hall and left message for bad French:

This does not reassure civilians who had seen pass stormed the French army to Cherbourg. The Germans who gave the order to evacuate certain areas placed artillery in some fields such as the “six paths” on “Chesnee” or close to the church of Calvary. The guns were pointed at the bridges Ouves where French troops were still resisting. the French marine shells from the “Courbet” fell on the Lande Godard or near the road Carentan- Périers to “green hunt”. However, no civilian was not touched. June 19 refugees were seen browsing through the country roads: the people of Le Havre, northern France. The people of Méautis who had fled the previous day returned home gradually.

The occupation army moved to Carentan and Méautis 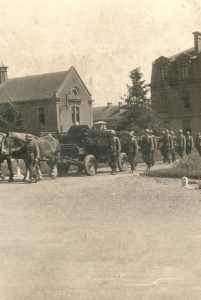 When the capitulation was signed between the French and Germans fighting stopped but the occupying army moved. German troops came to occupy all Carentan and the Cotentin. In 1940 the German troops stayed twice Méautis for a total of 60 days. The Germans settled permanently in the town of Méautis April 12, 1941 morning: they requisitioned rooms and apartments and lived under the same roof as civilians. And April 15 Corporal Barth commandeered the Reverend Father’s office, Ernest Lecointe located at the rectory where he found playing the piano. Later on July 17, this is his personal room that was requisitioned by Lieutenant Fuhr and his order that a man named Arnold gave him a souvenir unpleasant. Same thing for the teacher. While some behaved in a “nice” others took advantage of the situation and inflicted the worst humiliations. Méautis undergoes requisitions, the black market and the difficulties of everyday life. Note that the common Méautis was cut in two military areas that needed laissez pass to be able to move toward Carentan.

Of “Malgré-nous” from all countries …

the municipality of farms were not mostly occupied by the Germans. These are made of controls or were stocking up on the black market. German troops were composed before 1944 Méautis of Wehrmacht soldiers. There were these troops of Alsatian origin soldiers who spoke French perfectly and had been incorporated in spite of themselves in the ranks of the German army. Later from 1942 to 1943 Mongol origin soldiers or Russian Cossacks appeared to Méautis. They had been forcibly recruited by the Germans. The civilian population had a great fear because they were going crazy not knowing which side had to fight!

Shelter underground to protect themselves from bombs

Méautis knew like so many other French towns the consequences of fighting the landing with its share of destruction. Also many civilians dug shelters near their homes to avoid being buried under the rubble of their home.

→ Next: The Battle of Méautis