Resident at La Lande Godard near Méautis, 8 years old in 1944 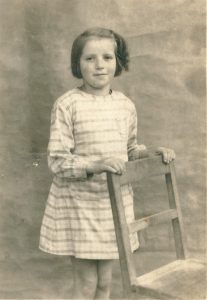 We lived during the war with my parents on a farm that still exists at La Lande Godard Méautis. My parents were farmers, especially mom because my father was very ill. There were five children at that time and I was the second last of the family.

I do not remember the Germans arrived in the town because I was too small. I remember my dad had taken us in ditches with my sister not far into the marshes. I have a vague memory of having seen a very large bomb crater at the Lande Godard. We were riding with Mom and Dad and the horse could not move before the huge crater. I also saw the same thing in a field Méautis qu’exploitaient my parents hamlet Culot.

I have no clear memories of the German occupation. I often heard the name of a lady which my parents spoke at home a few times and had close relations with the Germans. I did not remember that the Germans have occupied our farm before 1944. Furthermore I do not realize that we were occupied by the German army since I was a child. I did not have the feeling of having gone hungry but I remember ration cards for bread! My grandmother, who lived in the hamlet of Lower Bosq often told us that it was better to eat meat than bread which was too expensive for us.

My parents do not listen to the radio at home as we can discover today watching television programs about the war.

My memories take shape in 1944 when the first paratroopers arrived in the town because I remember that there was an excitement at home. And actually the paratroopers had landed that day. We looked through the windows and we saw all these red and green cloth in the trees. We thought it was the sheets because we had never seen parachutes of our lives. And then we were told: “It is the paratroopers arrived,” but it’s true that we did not understand too!

I also remember a thing that had important consequences later: my older brother, who was 20 at the time brought home chocolate. I do not know if it’s an American paratrooper who gave him or he found on the ground with the equipment. This chocolate we had hidden on the breadboard in the house.

I do not remember having met with US troops. Hence the fact that when adults told the Germans they had not met US paratroopers, I thought it was true, as later we were told they were gone!

One day during the Battle of Méautis he arrived Germans who gathered in the courtyard of our farm to Lande Godard. We were 21 people in all. We were lined up under the yoke of rifles or machine guns. The Germans searched everywhere on the ground floor and have all pushed the pram including my little sister three years, in case there would have been things hidden. And then I heard the adults whispering “my god chocolate that is on the breadboard, if they ever find out, they discover that …” In fact, they went under the windows of the house to ask people who were inside out. My father rose to the first floor window because it was a great patient was left lying on his bed most of the time. The Germans have not even done summation, they threw grenades who crossed the floor without hurting Dad. It took them understand that it was the husband who was there. They continued to gather everyone. We kids we were very scared, we tried to escape. We were really surrounded.

And it is this good Father Lecointe happened and who served as interpreter, saying the Germans “but my god there’s nobody here, forget it” and this good father he arrived, leaving his bike that he put the gable of the house, I always see him with his cassock he fell with his hands in his pockets.

For me it is a memory that marked me forever because he saved us … I confess that since that day death makes me very, very afraid … Then the Germans asked us to leave and then after it becomes vague . We were very afraid, for me it was awful!

We left towards the avenues on the road to Auvers where it drew a lot. We were with our friends Berthelot. I remember being hidden between two mattresses so it was shooting everywhere. At one point we saw happen a German who entered the house with a gun and said, “If any of you are England you immediately shot! “He then made us all out of the house and line up beside a well to show us a house that was on fire on the highway, which was that of a lady who Berthelot was the mother of a lady Hamel . We saw this house in flames and the German told us “well your home it will be poor! “He left because he found nothing. Whenever I see this well it reminds me of the great fear!

We then left the farm of La Mare Stones Méautis or we stayed in the bakery. Mrs. Leprine who lived next door made us soup I will remember the taste … And I think it was after we left by truck towards Fontenay but my memories are vague! Arriving at Fontenay there were boards made with straw to serve as a bed But one thing I remember is that Mom had wanted to stay Méautis to care for his animals. We were all worried with my sister who was with us in the pram. I see her trying to recover in the pram … Mom came back the next day at Fontenay. As she arrived we were happy because we thought she was dying.

When we returned to our home Méautis had not been destroyed. By against everything was messed up and had the house was looted. I see the rabbit hutches that were open and rabbits that were scattered all over the yard! An image struck me when we returned to the farm’s cellar which served infirmary to treat the wounded. I saw badly wounded but I do not know what nationality they were. We have also seen black American soldiers who were stationed on the streets of Auvers road. It was the first time I saw black soldiers but we did not fear.

I will remember the US airfield which was right across from us. We did not have the right to go for a walk there.

I remember on our return walk Fontenay American trucks sent us boxes in which were candy that had a taste … it was beautiful! In some boxes were a kind of cheese I forget the taste.

I do not know if my parents have hit war damage because my parents were tenants of the farm.

My father died in 1945 and one of my sisters TB! But mother was very courageous to output is then remarried. No one in our family was killed.

After the war we find munitions everywhere, it was extremely dangerous.

Before we left exodus of Méautis we were going to see my grandmother who lived in Bas-Bosq. We heard the noise of the battle. My mother went to see her animals feet towards the town of Méautis. That’s when she saw Marie Noémie who was killed with her two children. She also saw Léon Gosselin who had been shot by the Germans and who remained crouched against the wall. My mother risked her life in this return!

I know there have been accidents after the war. Even animals have hit mines!

When I think of the war it reminds me the tears! It’s horrible ! It’s awful … In my little girl’s memory to think what happens to people in other countries who live this thing right now is hard. I feel I have lived, perhaps for me in a smaller size, the same thing. We were lined up 21 people under the yoke of guns and although at that time we did not know what to die …

For me it is awful, the war I would not see her … at all, at all! When I see on television people who take to the road in exile I can not stop crying! You know my husband did Algeria, he was gone for 27 months and have trouble talking …