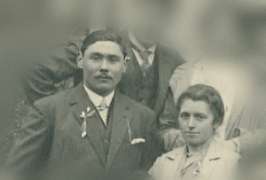 Real Bucaille had completely lost track of time during the terrible Bloody Gulch battle in June 1944. Also they could not remember specific days of fighting, from the fact of being in June 1944. They had noticed US paratroopers were hiding close to the property and that their actions against the Germans the following days June 6 German soldiers from Alsace and who spoke French came prevent villagers from Donville that “the SS arrived in reinforcement” and had to leave.

The Bucaille family decided to stay because of the animals (cows, horses …) but changed his mind quickly when the Germans retreated from Carentan Donville on 12 June 1944. They were expelled from the mansion by the 17th Panzer Division and Grenader German paratroopers of the 6th regiment June 12, 1944 which had a temporary command post.

They tried to go back to take some food but after successfully entering the house they asked warm milk but the officer who commanded the staff was also warm hers and said curtly: “after.” They were frightened and quickly left the house without taking anything.

They discovered that the house had become defensive and that the Germans had fortified all. The troops were hidden in the fields around the house to block the Americans who came of Carentan. During the battle they did not return to the house until the fighting was violent. They had to hide in ditches and dugouts near the neighboring houses with others. Explosions and gunfire were terrible. They saw the smoke rising from Donville to June 13 They lived this way without knowing what day it was and sometimes not to eat or drink.

When they returned home after the battle they found many bodies were lying in the avenue, in the yard and the fields around the farm. The farm buildings were partly destroyed (charreterie, bakery etc.) roofs had been blown out by gunfire, the dwelling house pierced by shell holes … In the main building the dead were left behind ( mainly Germans): one was lying on a mattress in the kitchen, another was under the shed, another garage …

Next testimony: The couple Chappey