Resident at the farm of Croix Picard at Méautis, 21 years old in 1944 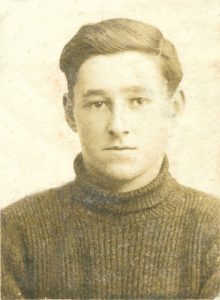 I was born in 1923 in the hamlet Méautis Lower Bosq. However my parents ran the farm Cross Picard was completely destroyed after 15 June 1944 which had served as a hospital for German soldiers.

My father, who first saw the Germans on their motorcycles in June 1940. He was returning from an aunt who lived Sainteny Pavilion farm. We decided to stay at home unlike other people fleeing on the roads. As the letter was not working, my father had gone skim milk at the farm. When he got home he told us “I met Boche, they arrived.”

We have not been bombing we were in 1940 in the Cross Picard. The Germans did not occupy the house before 1944 because the farm was too far from the town where they were stationed. By cons, about two months before the landing of German troops from many different units were doing the shooting to train in the Gorges marshes. The soldiers slept in the stables of the farm while officers had reserved the rooms. In this regard I remember quite funny at the coming of three officers who had requisitioned the rooms of our farm. One of them could not take off his boots and wanted to sleep in the bed with My father approached and told him, “you will not sleep with all the same? “Seeing that the German was decided to do my father helped the officer to remove his boots. I remember the scene with my father going to pull on the boots while the German sitting on the rug pushed with all his might! I was young and I could not go laughing at this table!

The Germans regularly came to the farm when they were stationed in the area. They were looking for eggs, poultry … I once met a German soldier original Alsatian one day before leaving on 14 June 1944 he was chef of the SS panzer division that was stationed at the farm of Ormeaux across from us. He entered the room of the farm and he asked us cider. I spoke with him and he told me he was going to the front to fight with a single pistol and some bullets! He gave me his address I noted in pencil on the corner of the fireplace and told me to write to his family that he was still alive on June 14! I did not because the next day we left in exodus and the farm was completely destroyed later. I never heard from him. 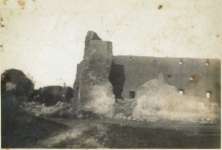 Ruins of the farm Croix Picard at Meautis

I do not keep a bad memory of the Germans until June 1944. This is when the SS arrived that they started us miseries. We were in contact with the paratroopers of Major Van der Heyhte which normally involved with us. They told us when the SS moved into our area “gently with these guys because they have done extraordinary things …” (they came from Angoulême and had massacred civilians). I remember a German paratrooper who approached my father and said, “Be serious, do not overdo it because they made misery in the countries they crossed”

I’ve never done strength but I know there were guys who were resistance in the corner on Méautis and Carentan.

On October 4, 1943 I received my summons to present myself to the prefecture of Saint-Lô in the compulsory labor service STO. But instead of leaving for Saint-Lô I went on to Bayeux Vaucelles in the farm of Monsieur Auguste Lesage my family knew. I stayed at work until May 1944. My dad picked me up in a cart and went back to Méautis to attend a wedding in my family. This is how I found myself on D-Day to Méautis! I could not go back to Mr. Lesage in Vaucelles because he wrote me that his farm was occupied by the Germans and it was becoming very dangerous.

On the night of June 5 to 6, 1944 we heard in the distance the bombing of Carentan and the sounds of the guns of the German air defense. However nothing was different from what we used to hear because the bombings were frequent during the occupation! The next morning I did not see any American paratrooper, we did not know it was the landing! I learned later that they were about Donville or Rougeval but they were not home. My mother saw three soldiers sneak out of a hedge but she was unable to know whether the soldiers were American or German!

We stayed until June 15, 1944 during the Battle of Carentan Donville then we saw happen in the first place German paratroopers came initially monitor those who planted the “asparagus” Rommel in marshes and on Friday June 9 Mongol soldiers and finally the SS Sunday, June 11

We dug a trench in the garden to protect us but we did not have to serve us. I remember the German soldiers who went to the front and passing our farm about June 13, 1944. They seemed afraid and we felt this was going to be hard for them. We have seen spending a lot of injuries but they were still able to walk with the help of other comrades. This was not seriously injured who came later to the farm. I remember a German paratrooper who was wounded in the foot and came back to me after the war in 1977. 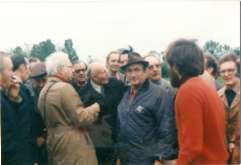 Civilians were coming from everywhere in the house during the Battle of Donville and Carentan: we were 44 people in total and no one was hurt when we were all on the farm! This is Major Von der Heydte who sent us a major when he was in Sainteny to tell us to evacuate the farm because it would have been a massacre. We took the horses that were left in the grass and were not hurt at all. We hitched cars and we left it on June 15, 1944. Leaving the farm we had to wait for the Germans captured the wounded who were lying at the entrance of the court and they put in trucks. Dr. Walter Schad told me when he came back after the war that our farm had been used as field hospital. Our family and myself we headed to Mesnilbus to reach the house of Madame Fromond. Other civil gone wherever they could. We stayed several weeks Mesnilbus until the village was evacuated in turn. I was going to work on farms with cousins on Feugères. Then we continued the exodus to Equilly Beauchamp. We returned in late August early September Méautis I do not remember very well.

By cons I remember the shock of seeing destroyed our farm. The Germans had installed after leaving the kitchen a mortar fired from the house through the roof which was completely smashed. This way the Americans, who were receiving mortar torpedoes to Oziers were unable to locate the starting mortar shells.

The house had not burned but was not completely destroyed shells and fighting. On our return the bodies were left in the house, we found a German sergeant under the threshold of the front door. The buildings and stables of the farm which served as hospital had burned with German wounded who remained inside. Valid had been able to retire and they burned alive. When the buildings were completely cleared after the war we found burned bones that were presented to the competent authorities.

My parents were friends with Mr. Raoul Dujardin Méautis saw themselves assigned a room and a room in the main house. And my parents were treated to a wooden shack they brought in the court of the farm Cross Picard where we operated. My parents hit the only war damage to livestock and not to farm because they were tenants. We lost all our family furniture, our papers. I was mobilized for myself and then in February 1945 when the armistice was signed I returned to my home.

The countryside was filled with equipment and ammunition of all kinds. Accidents occurred due to the presence of dangerous munitions.

We had six with my grandmother and we are fortunate to have not been affected directly by war. However I lost two aunts, one killed in Coutances.

We were surprised to see happen one day because a 1977 Germans, former paratroopers, who came to visit the scene of the fighting. And that’s where I found the famous soldier who had been wounded in the foot. All these guys had greatly changed! Dr. Walter Schad who treated the wounded in our farm came to see us until last year!

The war for me is sad moments! I pity the person who is not on the right side.